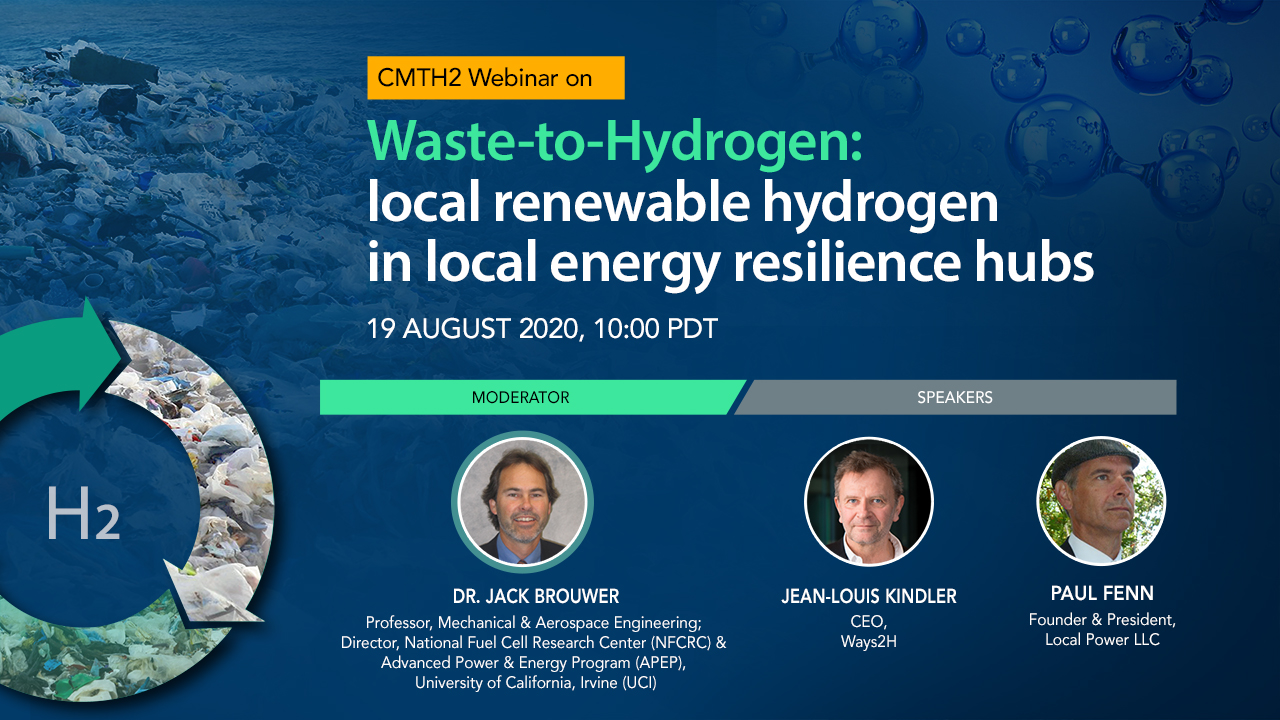 The global pursuit for aggressive greenhouse gas and waste reduction has prompted industry to look for interconnected and scalable solutions to battles climate change, waste and air quality issues. Meanwhile hydrogen has being touted as a promising decarbonizing replacement for fossil fuels, investment and mandate have been ploughed in to fast track the adoption and production of hydrogen in utilities, gas grid and transportation.

Pairing the possibilities together, join us at CMTH2 webinar for experts analysis and insights on hydrogen production from waste.

Join us for our webinar where we discuss about Waste-to-Hydrogen: Local Renewable Hydrogen in Local Energy Resilience Hubs, 19 August 2020, 1000 PDT.


Paul Fenn co-authored the nation's landmark 1995 municipal aggregation legislation in Massachusetts, and authored California's 2002 Community Choice (CCA) law, Assembly Bill 117, allowing municipalities to choose alternative electricity providers for their communities. Since then, Fenn and has played a leading role in the growth, and implementation of CCA across the U.S., as well as its development into a more robust program of localization called "CCA 2.0." Fenn wrote San Francisco's 2001 "Solar Bond" authority Proposition H - the nation's first "green bond."
The Founder and President of Local Power, Fenn is the company's technical lead on CCA-related program design and engineering, an author and strategist of numerous laws and policy campaigns, and also a published author of numerous essays and books on political theory, history, and energy, most recently Enlightenment in an Age of Destruction (Palgrave, 2018) co-authored with NYU philosopher Eduardo Subirats and GWU historian Christopher Britt, which "provides an alternative to current resistance theory in arguing for new modes of intellectual engagement in politics in an age of crisis, and contextualizes the practice of critical theory within contemporary political discussions on topics such as climate change, nuclear proliferation, and war."


Jean-Louis Kindler is CEO of Ways2H, a leading commercial provider of Waste-to-Hydrogen solutions for mobility and grid applications. A veteran of the environmental technology industry who has pioneered award-winning water, waste and renewable energy systems, Jean-Louis and his team are developing projects that transform the world’s worst waste - MSW, plastics, medical refuse - into clean energy and fuel.
Jean-Louis is also Co-Founder and CEO of cleantech management company Clean Energy Enterprises, which created Ways2H as a joint venture with Japan Blue Energy Corp. Previously, Jean-Louis was president of OriginClear Inc.’s Technology Division, a leading provider of water treatment solutions, where he led commercial development of a breakthrough water treatment technology. Jean-Louis is still a member of OriginClear’s board of directors. Before joining OriginClear, Jean-Louis was co-founder and chief technology officer of Ennesys, an award-winning French biotech company, where he designed an innovative waste-to-energy system and hosted French President François Hollande during a 2013 state visit to the company.
Jean-Louis earlier served as founding CEO of MHS Equipment, a French nanotechnologies equipment manufacturer, where he led the development of a new fuel cell components manufacturing process. Jean-Louis started his 30-year career in the cleantech sector in Japan, as principal of technology incubator Pacific Junction. His work there included technology sourcing for the French industrial group GEC-Alsthom, building the first version of the BLUE Tower waste-to-hydrogen commercial unit, and providing market development for a fluids-mixing technology.
Jean-Louis holds a Master’s degree in Economics and Public Policy from the Institute of Political Studies (Institut d'Etudes Politiques de Lyon) in Lyon, France, and an MBA in International Management from the ISG Business School (Institut Supérieur de Gestion) in Paris.

Ways2H™ is transforming the world's worst waste into on-demand clean fuel and electricity. It's a single solution to a double challenge: the $400 billion+ global solid waste market, and rapidly growing demand for clean hydrogen. Ways2H™ systems convert organic waste streams, including plastics, municipal waste and hazardous elements, into hydrogen. The systems are self-sustainable, scalable and with a modular footprint that makes them suitable for decentralized waste treatment and clean energy production, improving logistics for both the waste and energy industries.

Do register anyway to receive a recording of the presentation & slides, if any, after the live webinar.