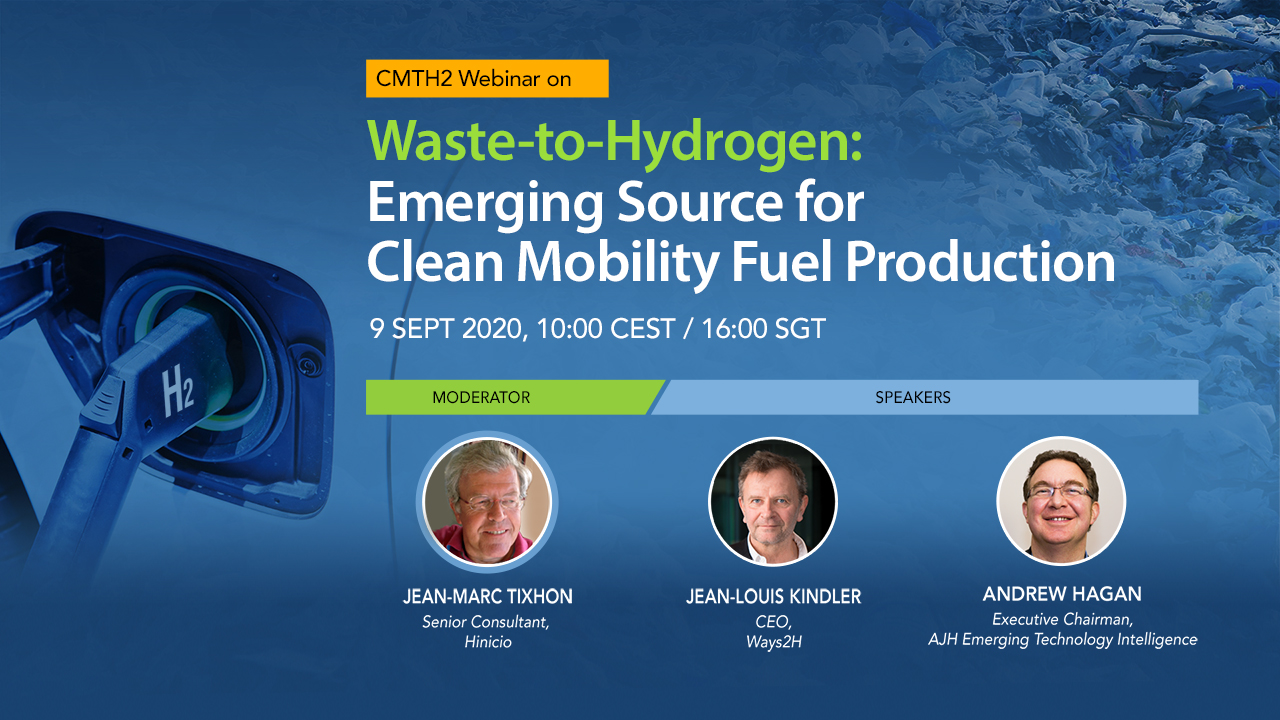 Solar and wind power sources are already highly solicited to decarbonize the electric grid. Organic waste, including plastics and sewage sludge, offer a useful alternative as a hydrogen source for clean mobility fuel production. The webinar looks into a case study around the complete value chain from waste processing to hydrogen delivery for a truly carbon negative transportation sector.

Pairing the possibilities together, join us at this 75-minutes #CMTH2 webinar for experts analysis and insights on hydrogen production from waste.

Join us for our webinar where we discuss about Waste to Hydrogen – Emerging Source for Clean Mobility Fuel Production, 9 September 2020, 10:00 CEST.

Jean-Louis Kindler is CEO of Ways2H, a leading commercial provider of Waste-to-Hydrogen solutions for mobility and grid applications. A veteran of the environmental technology industry who has pioneered award-winning water, waste and renewable energy systems, Jean-Louis and his team are developing projects that transform the world’s worst waste - MSW, plastics, medical refuse - into clean energy and fuel.
Jean-Louis is also Co-Founder and CEO of cleantech management company Clean Energy Enterprises, which created Ways2H as a joint venture with Japan Blue Energy Corp. Previously, Jean-Louis was president of OriginClear Inc.’s Technology Division, a leading provider of water treatment solutions, where he led commercial development of a breakthrough water treatment technology. Jean-Louis is still a member of OriginClear’s board of directors. Before joining OriginClear, Jean-Louis was co-founder and chief technology officer of Ennesys, an award-winning French biotech company, where he designed an innovative waste-to-energy system and hosted French President François Hollande during a 2013 state visit to the company.
Jean-Louis earlier served as founding CEO of MHS Equipment, a French nanotechnologies equipment manufacturer, where he led the development of a new fuel cell components manufacturing process. Jean-Louis started his 30-year career in the cleantech sector in Japan, as principal of technology incubator Pacific Junction. His work there included technology sourcing for the French industrial group GEC-Alsthom, building the first version of the BLUE Tower waste-to-hydrogen commercial unit, and providing market development for a fluids-mixing technology.
Jean-Louis holds a Master’s degree in Economics and Public Policy from the Institute of Political Studies (Institut d'Etudes Politiques de Lyon) in Lyon, France, and an MBA in International Management from the ISG Business School (Institut Supérieur de Gestion) in Paris.


Jean-Marc Tixhon is senior consultant at Hinicio.  He has over 30 years business management experience including sales marketing, product development at Dupont.  He has also spent 13 years in his career focusing on solar, fuel cell and hydrogen.


Dr Andrew Hagan has spent much of the last twenty years working on Hydrogen, climate and energy. His Masters at Oxford and PhD at Cambridge for the UK Ministry of Defence/DERA/Qinetiq were on advanced materials and where an interest in “entrepreneuring” began at the CEC. He has since done an MBA and was a free reader in European politics, law and economics in Strasbourg before a masters in Global Leadership at the WEF and time at MIT and Waginingen.
He has worked at Air Liquide and Shell managing a country and a region for a product before enjoying almost ten years at the WEF as a director heading the Chemistry and Advanced Materials and starting the work on Emerging Technologies and Biotechnology. There he initiated a Collaborative Innovation platform, and managed several projects from new energy sources to energy storage and organised sessions on Hydrogen, and was an advisor at the Smith School for Enterprise and the Environment at Oxford University.
With his own business he now consults to Governments, C-suites of large energy and chemical companies and sits on boards and advisory boards, including for a Hydrogen company, Hydra Energy, and a Carbon Capture company as well as starting a Hydrogen business.
Dr. Hagan is a Chartered Scientist and Chartered Chemist.

Ways2H™ is transforming the world's worst waste into on-demand clean fuel and electricity. It's a single solution to a double challenge: the $400 billion+ global solid waste market, and rapidly growing demand for clean hydrogen. Ways2H™ systems convert organic waste streams, including plastics, municipal waste and hazardous elements, into hydrogen. The systems are self-sustainable, scalable and with a modular footprint that makes them suitable for decentralized waste treatment and clean energy production, improving logistics for both the waste and energy industries.

Do register anyway to purchase the event recording, available after the live streaming.